Фрагмент из книги:
Christine reacted to the spider in this way because she has a phobia - a strong fear that she can’t control. Her phobia is called arachnophobia - an extreme fear of spiders. But spiders are not the only animals that people are frightened of. Other animals can have a similar effect, including dogs, fish, birds and even frogs. There are also other types of phobia, such as environmental phobias (like fear of flying) and medical phobias (for example, when people are terrified of going to the dentist). 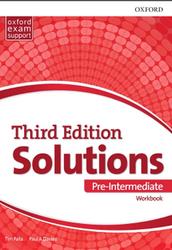 Exam Skills Trainer.
1 Read the Strategy. Then read the first main paragraph of the text and the first question. Choose the correct option and underline the part of the text where you find the answer. Why are the other options wrong?

2 Now read the whole text. Choose the correct answers (A-D).
Mark Harris is a research scientist at Rothera Research Station, on Adelaide Island in the Antarctic. We asked Mark what were the best and the worst things about living in the Antarctic.

The best thing about being here is the wonderful view; Mark said. On my first day, I was unlucky because I was ill and had to spend a few days in bed. The station's doctor thought I'd eaten something bad at home, or in the station canteen, but I didn't even go to the canteen. I think it was the meal I had on the journey across - it didn't taste right to me. And so I was pretty miserable at the beginning. But then I lay in bed during those first days and watched icebergs drifting past my window. It was amazing! In summer, I like to be outside as much as possible. One of my jobs is to fly around with other scientists in a helicopter making observations and checking on experiments. We fly over the most fantastic places. Our pilots are really skilled. They can land anywhere - even on glaciers!'