The world's most trusted guide to problems in English - now in a new edition.
Overview
A dictionary of problem points in the English language as encountered by learners and their teachers. Common problems are solved with practical, clear information in over 600 entries.
Who is it for?
Teachers of English.
Higher-level students of English (working alone or in class).
Key features
Thoroughly revised following extensive research with current users of the book.
New features make it easier for users to find their way around the book.
All the most popular entries are retained, but almost all the entries have been modified to make them clearer and more effective in solving readers' problems.
Explanations and examples now based on current corpus research.
New entries on 'Kinds of English', covering standard English and dialects, correctness, spoken and written English, formality, and variation and change. 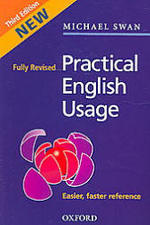 I am grateful to all the people who have helped me with the preparation of this third edition. A large number of teachers in different countries were kind enough to respond to an enquiry asking how they felt Practical English Usage could be improved: their feedback was extremely helpful, and 1 am very much in their debt. I am also greatly indebted to David Baker, whose comments and suggestions have added very significantly to the accuracy and clarity of the book, and to Hideo Hibino and Kenji Kashino, who have contributed valuable advice on specific problems. Many other teachers and students - too many to name -have taken the trouble to suggest ways in which particular entries could be improved; their input has benefited the book considerably. My use of the internet as a source of instances of authentic usage has been greatly facilitated by the kind assistance of Hiroaki Sato, of Senshu University, Japan, who made available his excellent software tool KwiconGugle. I must also reacknowledge my debt to Jonathan Blundell, Norman Coe, Michio Kawakami, Michael Macfarlane, Nigel Middlemiss, Keith Mitchell, Catherine Walter, Gareth Watkins, and the many other consultants and correspondents whose help and advice with the preparation of the first and second editions continue as an important contribution to the third.
Any pedagogic grammarian owes an enormous debt to the academic linguists on whose research he or she is parasitic. There is not enough space to mention all the scholars of the last hundred years or so on whose work I have drawn directly or indirectly, even if I had a complete record of my borrowings. But I must at least pay homage to two monumental reference works of the present generation: the Comprehensive Grammar of the English language, by Quirk, Greenbaum, Leech and Svartvik (Longman 1985), and the Cambridge Grammar of the English Language, by Huddleston, Pullum and others (Cambridge University Press 2002). Their authoritative accounts of the facts of English structure and usage constitute an essential source of information for anyone writing pedagogic grammar materials today.