Most candidates like to read model answers as a very powerful way to get the best possible Band score when they are preparing for the IELTS speaking module. This ebook provides model answers for IELTS Speaking Actual Tests that appears in the IELTS speaking module. Even if your English is not perfect, you can transform your IELTS Band score by using this book.
The model answers are intended as a guide and candidates should modify the answers to suit their own circumstances and add to them wherever appropriate. In other words, candidates should consider using the vocabulary and grammatical structures in this book to help them to create their own answers. 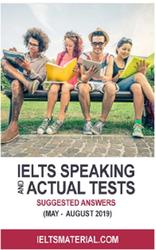 Films.
5.1. Do you like watch films?
Absolutely! They are an excellent way to unwind (relax; free your mind). Moreover, my friends are reallt into films, so it’s a fun, relaxing way to spend time together. Afterwards, we discuss and debate the film that we have just watched. Apart from just relaxing and enjoying the film, I like to delve deeper (get to the deeper meaning) to discover the subliminal messages.

5.2. What kinds of movies do you like best?
Well, I would say I’m still a kid at heart (a person who still feels like a child in their heart), so I really enjoy watching kids’ movies. Although they seem simple and innocent, there are often many life lessons packed into these films. Moreover, I'm really into drama and historical movies. When I watch these, I feel that I can more deeply understand human emotions and re-live historical moments, like the Vietnam-America War or World War II.

5.3. Do you prefer foreign films or films made in your country?
Since my country doesn't have a huge film industry, I’ve always been really into American films. Not to knock (to insult; discredit) other film industries, but American ones are incredibly entertaining and well-made; the evolution of film continues to amaze me. Moreover, I only watch films in English so it helps me to learn new slang and expressions.