Фрагмент из книги:
In Amsterdam today, 38% of all trips are made by bike and, along with Copenhagen, it is regarded as one of the two most cycle-friendly capitals in the world - but the city never got another Witte Fietsenplan. Molenaar believes this may be because everybody in Amsterdam already has a bike. Schimmelpennink, however, cannot see that this changes Amsterdam's need for a bike-sharing scheme. ‘People who travel on the underground don’t carry their bikes around.
But often they need additional transport to reach their final destination.’ Although he thinks it is strange that a city like Amsterdam does not have a successful bikesharing scheme, he is optimistic about the future. ‘In the ‘60s we didn't stand a chance because people were prepared to give their lives to keep cars in the city. But that mentality has totally changed. Today everybody longs for cities that are not dominated by cars.’ 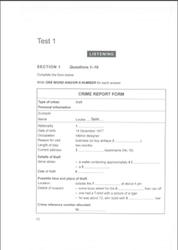 Примеры.
Carla and Rob were surprised to learn that coastal cities
A contain nearly half the world’s population.
В include most of the world’s largest cities.
C are growing twice as fast as other cities.

According to Rob, building coastal cities near to rivers
A may bring pollution to the cities.
В may reduce the land available for agriculture.
C may mean the countryside is spoiled by industry.

What mistake was made when building water drainage channels in Miami in the 1950s?
A There were not enough of them.
В They were made of unsuitable materials.
C They did not allow for the effects of climate change.

What do Rob and Carla think that the authorities in Miami should do immediately?
A take measures to restore ecosystems
В pay for a new flood prevention system
C stop disposing of waste materials into the ocean.