British or American English? - A Handbook of Word and Grammar Patterns - Algeo J.

Speakers of British and American English display some striking differences in their use of grammar. In this detailed survey, John Algeo considers questions such as:
-Who lives on a street, and who lives in a street}
-Who takes a bath, and who has a bath}
-Who says Neither do /, and who says Nor do /?
- After "thank you", who says Not at all and who says You 're welcome}
- Whose team are on the ball, and whose team is? 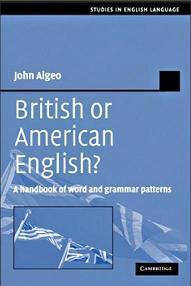